(Civil liberties were suspended and a state of national emergency declared during a special presidential broadcast on all channels between noon and 12:30 on April 30. Fifteen minutes later the first rioting started in New York, at the Port Authority on Forty-first Street, where a mob attempted to overrun the police and steal buses in which to escape to Canada. It was 6:45 P.M. just then in Ingolstadt, and Count Dracula and His Brides were giving forth a raga-rock version of an old Walt Disney cartoon song . . . And in Los Angeles, where it was 9:45 A.M., a five-person Morituri group, hurriedly convened, decided to use up all its bombs against police stations immediately. "Cripple the motherfucker before it's heavy," said their leader, a sixteen-year-old girl with braces on her teeth . . . Her idiom, in standard English, meant: "Paralyze the fascist state before it's entrenched" . . . and Saul, trusting the pole-vaulter in the unconscious, was leading Barney and Markoff Chaney into the mouth of Lehman Cavern . . . Carmel, nearly a kilometer south of them, and several hundred feet closer to the center of the earth, still clutched his briefcase and its five million green gods, but he did not move . . . Near him were the bones of a dozen bats he had eaten . . .)
TO BE A BAT'S A BUM THING
A SILLY AND A DUMB THING
BUT AT LEAST A BAT IS SOMETHING
AND YOU'RE NOT A THING AT ALL

Initially, the graphic novel "V for Vendetta" was a cult artwork that had a strong influence on many people and gave rise to their interest in anarchism. Alan Moore, the author of this work criticized the Hollywood production for distorting the meaning, for excluding the topic of anarchism and even refused to list his name in the credits. As a result, the feature film became a brand of the youth subculture of Anonymous, which serving ddos attacks of government coordinators and which funding the production of plastic guyfox-merchandise.

Not long ago, the BBC released a video titled "What is the fascination with the Illuminati conspiracy?", which briefly mentioned the Order of the Bavarian Illuminati and most of the video said that the modern Illuminati was an invention of Discordian jokers, promoted by the trilogy "Illuminatus!".

And after that, 30 days ago, the news appears that the production company that released some entertaining TV-series in collaboration with a Hollywood director announced the adaptation of the trilogy "The Illuminatus!" by Robert Anton Wilson and Robert Shea.

And they seem to be in a hurry to show this adaptation to masses before the immanentize the eschaton, for turn a golden apple into a gilded plastic merchandise, just as the "V for Vendetta" was reformatted. I have already met attempts to discredit the name and legacy of Robert Anton Wilson in social networks. Unfortunately, the original authors of "Illuminatus!" will not be able to declare their wish to exclude the mention of their name from the titles of Hollywood adaptation.
Therefore, in the exercise of our apostolic authorization, we, the Apostles of Eris, openly declare the open secret conspiracy and invite for complicity:

For the sake of preserving the cult status and the original meaning of the trilogy "Illuminatus!", so that it is not desecrated by Greyface, through Hollywood adaptation and plastic merchandise - all this will please the Goddess: sabotage, diversion, provocation, property damage and other deliberate malicious acts in relation to the process of creating this product of mass culture and relation to all participants of this well-paid TV adaptation. All this is openly declared goddessly, in case it is directed against the attempt of Hollywood's "Illuminatus!" adaptation. Take part in our most open and most secret conspiracy. Most secret is because none of the conspirators know who else is in this conspiracy. Most open because the purposes and victims of this conspiracy are well known. These will the central victims:
Hivemind production company
Brian Taylor
European production company Kallisti

I want to introduce you with a Soviet Discordian Saint:
#^https://www.lada.kz/sms_news/62333-bashnya-shpaka.-mangistau-video.html

Kirill Ignatievich Shpak found water where nobody thought to find it, started a vegetable garden, people were growing vegetables here. He taught Chabans how to grow corn. He planted the garden. The Chabans rejoice: the water was next to them. Kirill said to the guys: "Let's put the tower over the well as a memento". To help the Chabans be more effective to look for water. So the tower appeared. Nearby we can see foundations - there were many buildings here...
They made a documentary about him called "Lord of the Flies".

Some of the people around him compare him to a brave little tailor, they joke on him about his unprecedented war with flies; others call him a garbage collector; some of them heard that he have breed a lot of rabbits and threaten to feed a whole city of Guriev with lot of rabbits and "throw hats"; some of them laugh too: he opened a zoo at home. And the others one has something spicy to add. It is known that the rumors of the earth are full... But few people will speak respectfully about the old "informal" man. Even the representative of the unforgivable profession - a dog hunter, who sometimes sells bodies of killed poor dogs to the old man, speaks about old man like an abnormal. The poacher, and he will condemn him - "defender of beasts". 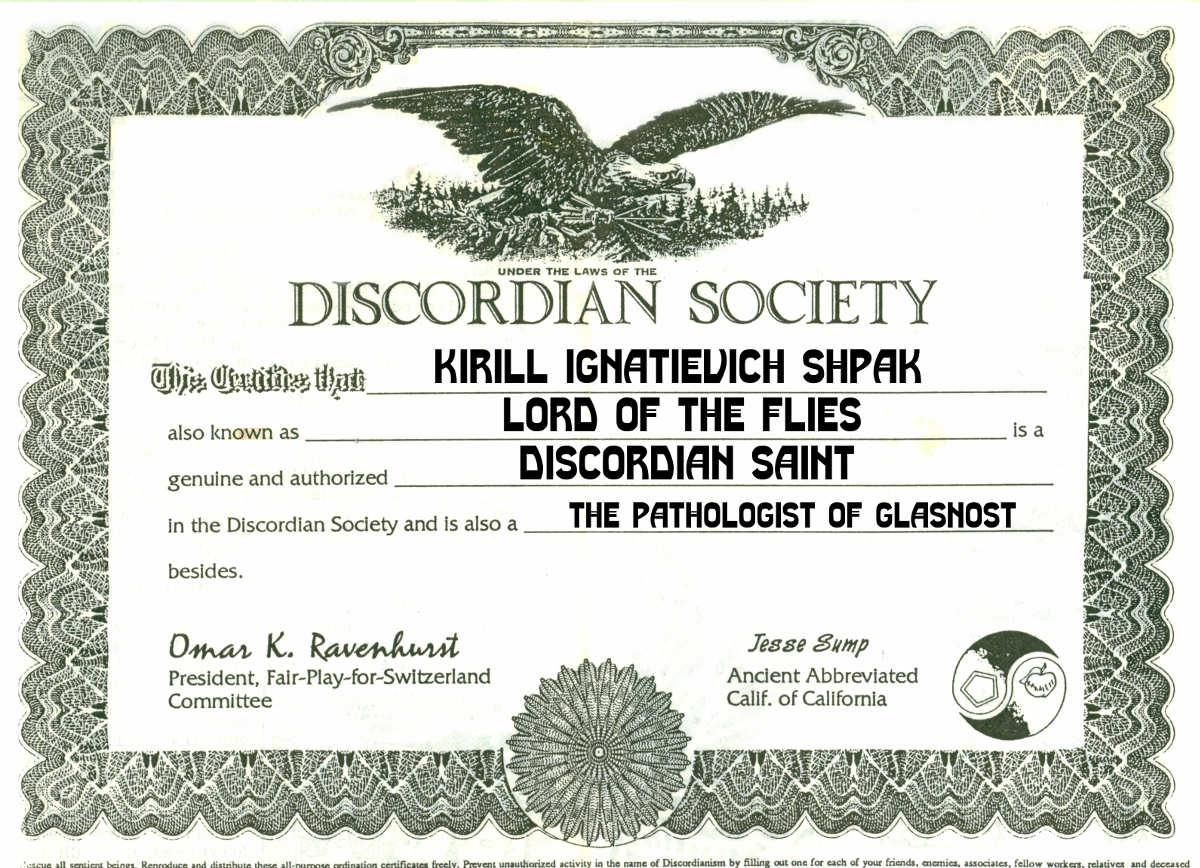 In the exercise of my authorization, i declare officially:
BBC lies - #^https://www.bbc.com/ideas/videos/what-is-the-fascination-with-the-illuminati-conspi/p07q0jd2

Using my apostolic authority, on this day i rank in concord Greek Orthodox Saint Mammes among the Erisian Saints. Now Mammes is twice a saint (in two religions), and this day is the 39th of Bureaucracy of the Erisian calendar and the 2nd of September of the Julian calendar, from now on it is twice the day of St. Mammes. 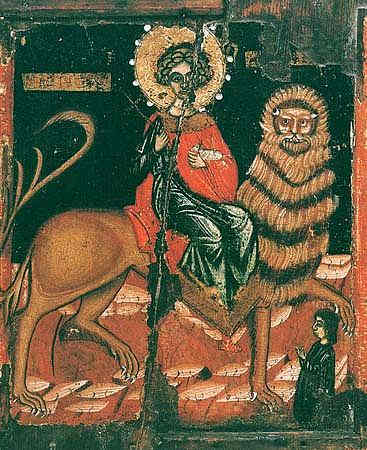 Mammes, a Cypriot hermit, lived by raising sheep, grazing goats and growing grapes. He did not pay any taxes. The Roman viceroy was angry at a shepherd who did not observe financial discipline, and sent soldiers after him. When the soldiers led the violator to the viceroy, a huge lion ran out of the forest, escaping from the circus. The soldiers, frightened, fled, and Mammes with a single movement of his hand tamed the lion and ridden on him to the viceroy. The astonished Roman freed Mammes from all taxes and duties. Since then, this saint has been the patron saint of animals and tax evaders. 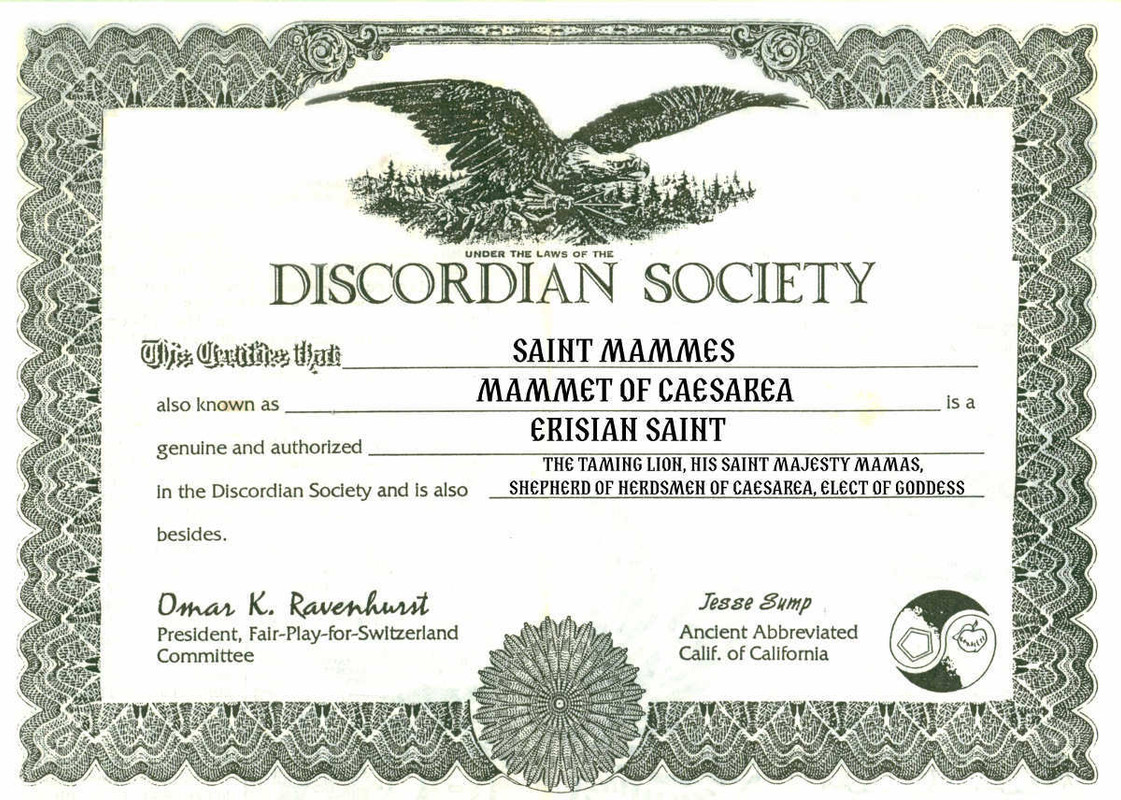 Living in the conditions between staircases is unnatural. Unnatural lifestyle kills. But there's always a way to live at someone else's expense. If parents cannot live at their children's then they can always get a pet animal.

While those domesticated apes (calling themselves humans) who live in countryside have a life power inter-exchange with other species (with cows or sheep, for example), urbanized apes have much more severe circumstances.

Urbanized apes (calling themselves citizens) keep domestic pets (cats and dogs, for example) not for exchanging services (that is, mouse hunting/territory guarding in exchange for food), but for energy leeching.

From love to hate, there is only one step. Exactly for this reason the cruelest among urbanized apes love their domestic pets very much. They literally suck life out of their pets. The pets realize everything, but they are driven into a corner. Often they are castrated to deprive them of the will to live.

But, as a rule, before spring comes, when the leeching owners aren't ready for that, some pets manage to escape the emotional snare and staircases. Yet, in order to learn sucking life energy from another specie one needs time and preparations, and that's why owners try to get their habitual life donors back in any possible way.

Materials on the subject:

How rainbow comes into being (oblivion) in the New and Old World:

The following image vividly displays the core of the math conspiracy:

This hoax is intended by academical scientists for their profit. In Russian tradition, recruitment into this conspiracy is initiated by reciting «The Math is the queen of all sciences». In English tradition, as you can see, this conspiracy is included into the term of «Purity». To get to the core and sort out the conspiracy it is enough to make the math become a vaillain of science, or simply sort sciences by their «durity»:

Because of their royal disdain, mathematicians ignore the results obtained by other scientists, which results in a hypercube:

And their royal patronizing attitude, along with the influence upon math education ever since the schooldays, make their disciples merged into their fractal hypercube.( Read more...Collapse )ODD# I/(e)/5,i;59Afm3180

Use ‘ddate‘ to check your date:

Maladay occurs the fifth day of The Aftermath. It is dedicated to Malaclypse The Elder. It is one of the five Apostyle Holydays. What better way of celebrating the end of Bureaucracy (finally) than a game of Flip the Table!?

For added enjoyment why not leave all the paperwork/briefcases/bills/handgrenades that accumulated during that, the most vile month of the year, Bureaucracy right there on the table while you flip it??? (I know, right: so obvious. But some people choose not to see the obvious in hopes they will rather see the unobvious…but they’re mostly just blind) This may even be considered a symbolic gesture and, who knows, maybe someone will be enlightened (don’t count on it though…)

Very little is known about Malaclypse the Elder, the namesake of Mal-2. The Principia Discordia merely mentions him as a “non-prophet” and that he was mistaken for a doomsayer when carrying a sign that read “DUMB”. His Holyday is Maladay. malaclypse the younger claimed this day, but being that he was the younger, he may have lost out. On the other hand, move your feet, lose your seat.
( Read more...Collapse )
An Encounter with Malaclypse the Elder
( Read more...Collapse )Then, he continued, “In actuality, the whole world is libertarian. Individuals are supreme, whether they know it or not. We all have virtually unlimited choice all the time. We may assume beliefs limit our choice. We may also get ourselves into situations that where choice is limited; but those are also choices. Objectively, there are no so-called ‘states,’ ‘governments,’ ‘kings,’ ‘queens,’ etc. There never have been and there never will be. I have asked many people to show me a ‘government’ and to tell me what it looks like. Nobody has been able to do that. Of course, there are hucksters who call themselves ‘government,’ ‘king,’ or ‘president’…just as there are suckers who believe them, who blindly obey them, who blindly oppose them.( Read more...Collapse )

A forgery is a deliberate attempt to mislead the public (readers, spectators, audience.) This notion is generally attributed to an art form and does not imply any deceitful wrong-doing.

In mass consciousness, it is widely held that the Stonehenge is genuinely ancient, supposedly as old as five thousand years. Meanwhile, the island exhibits the tallest megalith ever worked by man, which is the Rudston monolith estimated to be only three and a half thousand years old. Moreover, as lately as seventy years ago, the Stonehenge location was reached out by a railway spur that was subsequently dismantled by the landed proprietors of that time. Here you can view the photos illustrating the process of building this forgery up, as well as acquaint yourself with the list of main sources for would-be etchings of past ages and written testimonials:

( Read more...Collapse )
"M for mystification" - the following work by Orson Welles is the last motion picture he screened some forty years ago. It documents the story of Elemér Albert Hoffmann (Elmyr de Hory), one of the greatest art forger of all times.